After Ilha Grande had to be skipped, i arrived at the bus terminal in Rio and went straight to the Copacabana Hotel. I planned to stay 4 nights in Rio at least.
I checked in, went to the pool reading a book and checked my flight status – no information yet. I was curious whether Rio flights will be still going in the next days and decided to to call Lufthansa. No success with German numbers, so after a couple of tries i got hold of some FTL Hotline in Rio. I was told the last direct flight will go today (in approx 2,5 hours) and they don’t know anything else yet. I decided to better get home earlier and went right to the airport. Due to the fact, that EU only allowed immigration from european citizens, 25 people were unloaded from the flight and i was lucky to receive a short term slot back to Frankfurt. Turned out, it was the last direct flight and the plane was full of diplomatic people getting home also. I made a picture from the copacabana from the taxi only. The weather was super cloudy, so i didn’t even see the Sugarloaf mountain or the statue of Christ the redeemer from the distance…. to be continued in Rio!!!! 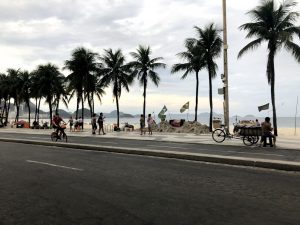 Copacabana from the taxi

Getting to the airport 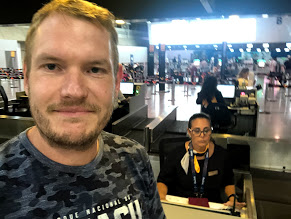 Glad to get a ticket 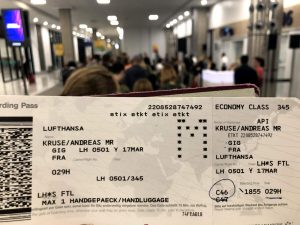 © 2023 www.isnais.com
We use cookies on our website to give you the most relevant experience by remembering your preferences and repeat visits. By clicking “Accept”, you consent to the use of ALL the cookies.
Cookie settingsACCEPT
Manage consent

This website uses cookies to improve your experience while you navigate through the website. Out of these, the cookies that are categorized as necessary are stored on your browser as they are essential for the working of basic functionalities of the website. We also use third-party cookies that help us analyze and understand how you use this website. These cookies will be stored in your browser only with your consent. You also have the option to opt-out of these cookies. But opting out of some of these cookies may affect your browsing experience.
Necessary Always Enabled
Necessary cookies are absolutely essential for the website to function properly. These cookies ensure basic functionalities and security features of the website, anonymously.
Functional
Functional cookies help to perform certain functionalities like sharing the content of the website on social media platforms, collect feedbacks, and other third-party features.
Performance
Performance cookies are used to understand and analyze the key performance indexes of the website which helps in delivering a better user experience for the visitors.
Analytics
Analytical cookies are used to understand how visitors interact with the website. These cookies help provide information on metrics the number of visitors, bounce rate, traffic source, etc.
Advertisement
Advertisement cookies are used to provide visitors with relevant ads and marketing campaigns. These cookies track visitors across websites and collect information to provide customized ads.
Others
Other uncategorized cookies are those that are being analyzed and have not been classified into a category as yet.
SAVE & ACCEPT
Powered by